TOPMAN, Octopus Investments and the Campaign Against Living Miserably (CALM) join forces today to highlight the prevalence of male suicide, the single biggest killer of men aged under 45.

Today more than 20,000 limited-edition ‘Mind the Chap’ oyster card holders are to be given out to commuters passing through West London tube stations during the morning and evening rush hours.

The campaign comes in the middle of Men’s Health Week and is targeting thousands of commuters with the slogan ‘Mind The Chap’ to serve as a reminder that men are three times more likely than women to die by suicide.

Today’s ‘Mind the Chap’ event echoes the successful launch of the awareness campaign in November 2015, which marked International Men’s Day.

“CALM’s ‘Mind The Chap’ campaign aims to make people aware of an issue that has been too long swept under the carpet. TOPMAN is thrilled to be involved in such a great event once more. We’re proud to share CALM’s commitment to preventing male suicide and changing culture so men are no longer expected to be invulnerable.”

“London is a thriving economic centre because of the millions of people that come to work here every day. If Octopus Investments can help reach out to some of those people via CALM’s ‘Mind the Chap’ campaign, and encourage them to look after themselves and each other, then that’s a job worth doing. We’re excited to be backing ‘Mind the Chap’ again.”

"We are hugely grateful for the support of both TOPMAN and Octopus Investment in running ‘Mind the Chap’ to getting CALM’s message and service details literally into guys’ pockets. Men account for 76% of all suicides in the UK and together we’re fighting to change that.”

For more information visit https://www.thecalmzone.net/ or find us on Twitter @theCALMzone.

ABOUT MALE SUICIDE AND ITS IMPACT

Research consistently shows links between media depiction of suicide and imitative suicidal behaviour. This risk significantly increases if the suicide method is described. Please check with the Samaritans’ Media Guidelines for Reporting Suicide when reporting this issue.

The Campaign Against Living Miserably (CALM) is an award-winning charity working to prevent male suicide in the UK (reg. 1110621).

CALM receives in excess of 4,000 calls to the helpline / webchat and 40,000 uniquewebsite visitors each month. CALM was founded in 2006, and in the first ten years of operation has helped treble awareness of male suicide in the UK (YouGov).

TOPMAN has 256 stores in the UK, with a further 154 international franchises operating in 39 countries.

The USA sites are fully owned flagship stores and this will be a total of 8 stores by April 2015. TOPMAN is also sold in 52 Nordstrom stores across the USA.

TOPMAN.COM attracts an average of over 900,000 visits per week, with in excess of 100 new products going live online per week and shipping to 110 countries.

It has dedicated transactional platforms for the UK, US, Germany, France and the four largest Asian markets of Singapore, Malaysia, Thailand and Indonesia.

TOPMAN has supported the NEWGEN MEN British Fashion Council run scheme for 5 years, and a total of 25 designers have launched businesses through the program. TOPMAN is also entering the 10th year of MAN; a joint initiative with Fashion East which enables emerging designers the opportunity to show on schedule at London Collections: Men. MAN has supported over 20 designers over this period.

Octopus Investments is a fast-growing UK fund management business with leading positions in several specialist sectors including healthcare, energy and smaller company investing. Founded in 2000, Octopus manages more than £5 billion of funds on behalf of 50,000 investors.

As an entrepreneurial company, we understand what it takes to build a business. We work hand-in-hand with some of the most successful entrepreneurs and management teams in the country to help finance companies capable of creating, transforming or dominating their industry. We invest in both private companies and those listed on the Alternative Investment Market.

Exceptional customer service and a straight talking approach to investing are integral to the way we do business at Octopus. We have twice been voted one of the best 100 smaller companies to work for.

[1] On the basis that 12 men on average take their life every day, and the cost of a single suicide in the UK is estimated at £1.67 million (Source: McDaid, D., Park, A., & Bonin, E. (2011). Population level suicide awareness training and intervention. In M. Knapp, D. McDaid & M. Parsonage (Eds.), Mental Health Promotion and Prevention: The Economic Case (26-28). London: Department of Health). 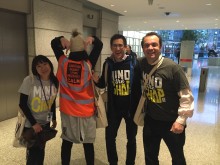