Public can actively take a stand against male suicide by signing the petition: http://bit.ly/SuicidePetition2018

Petition is led by Matthew Smith, who lost his brother Dan to suicide, with male suicide prevention charity the Campaign Against Living Miserably (CALM)

Every week, 84 men in the UK die by suicide – one life lost every two hours – and male suicide continues to be the biggest killer of men under 45

Today a petition has been launched calling for a government minister within the Department for Health and Social Care to be made responsible for suicide prevention and bereavement support in the UK. The petition comes over a year after Teresa May announced plans for mental health reform, including a new suicide prevention strategy with a focus on high-risk people like young and middle-aged men, and is headed up by Matthew Smith, who tragically lost his brother Dan to suicide 13 years ago.

Matthew has joined forces with the Campaign Against Living Miserably (CALM), a charity dedicated to preventing male suicide, for the petition which aims to convince the government to take action to improve suicide prevention and bereavement support. This would entail national quality standards for suicide prevention and bereavement support, effective implementation of local suicide prevention plans, and accurate data about people who take their own lives so we can better understand how to help them stay alive. Further information on what the petition is calling for is here: http://bit.ly/SuicidePetition2018FullAsks

Matthew, from Country Durham, said: “My brother Dan was my best pal and my idol. The true horror of what we as his family experienced when he took his own life is something that could be preventable if we all take a stand together. Dan was just one of the 84 men who take their own lives every single week in the UK. The numbers still shock me and yet there’s no minister in the UK government who is officially responsible for suicide prevention and bereavement support. It doesn’t have to be this way. It’s time to take a stand. I’ve joined forces with the Campaign Against Living Miserably (CALM), who are leading the movement against male suicide. Together, we are calling for change and that can start with something as simple as signing our petition.”

Suicide claims the lives of more than 6,000 British men and women every year and is the single biggest killer of men under 45 in the UK. The average cost of each suicide in the UK is estimated to be £1.67 million[1], while those bereaved and affected by every suicide averages at 135 people[2].

Simon Gunning, CEO of CALM, said: “Achieving our goal of male suicide prevention requires everybody to take a stand. As a society we have to face this awful issue and actively work to stop it. If this was anything else, an issue with less stigma, we have no doubt the government would take immediate and decisive steps towards prevention. It’s time to take a stand against male suicide so that there are fewer men like Dan and fewer families like Matthew’s.”

On the morning of Monday March 26, CALM will launch a new campaign to further initiate much-needed conversation and action around male suicide prevention and bereavement support.

Join Matthew and CALM to take a stand against male suicide by signing the petition: http://bit.ly/SuicidePetition2018

Further info on the petition: http://bit.ly/SuicidePetition2018FullAsks

Matthew Smith is 23 and from County Durham. His brother, Dan, took his own life in 2005.

For more information on CALM’s campaign launching on Monday March 26, please contact the team at W Communications on 84@wcommunications.co.uk. 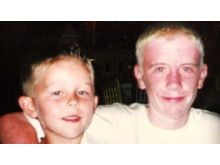