The Campaign Against Living Miserably (CALM) has released the results of a suicide awareness survey to coincide with today’s new statistics showing 75% of UK suicides are male.

Figures released today by the Office for National Statistics (ONS) reveal that, whilst the female suicide rate in the UK rose in 2015 and the male suicide rate slightly declined, males still account for three in every four UK suicides. The male suicide rate increased in all UK countries except England, and in Northern Ireland reached a record high in 2015 with 30.3 deaths per 100,000 population.

CALM is dedicated to preventing male suicide through support services and campaigning for culture change. Since 2006, when CALM began working to share the fact of suicide being the leading killer of men under 45, UK awareness has trebled. Today CALM released the latest figures, showing awareness among the UK population reached a record high at 33% in November 2016, up from 29% in December 2015 (YouGov).

CALM’s Chair of Trustees James Scroggs said: “CALM has been working phenomenally hard to get male suicide on the agenda for ten years. Now one in three people in the UK are aware suicide is the single biggest killer of men under 45, we’re reaching a tipping point. It’s crucial we continue to shed light on this issue, because awareness is the first step in creating change. Once people know male suicide is such a huge problem, we can work together to change our culture of strong, silent masculinity and ultimately keep more men alive."

The ONS figures show suicide rates decreased across all English regions in 2015 compared with 2014, with the exception of Yorkshire and The Humber and London, which saw the largest percentage increase. As CALM reported ahead of International Men’s Day in November, the male suicide rate in London peaked in 2015 to the highest it’s been since 1999.

CALM continues to campaign strongly in London with activities such as commuter event 'Mind the Chap', which reached 40,000 Londoners during 2016. CALM's latest figures show awareness of male suicide in London is higher than in the general UK population at 39%.

"While the increase in the suicide rate this year is a result of an increase in female suicides, males still account for three quarters of all suicides. There has also been a continued increase in suicides for males under the age of 30, however, these remain lower than the peak seen in the late 1990's and remains significantly lower than the suicide rate for middle-aged males despite falls in recent years." - Jodie Withers, Health Analysis and Life Events, Office for National Statistics 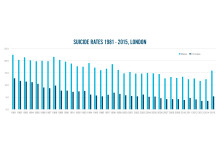 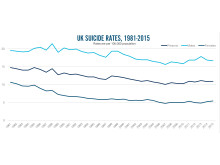