The Campaign Against Living Miserably (CALM) has been chosen by the Duke and Duchess of Cambridge and Prince Harry to join Heads Together, a new campaign promoting wellbeing.

CALM is an award-winning charity dedicated to preventing male suicide, the single biggest killer of men under the age of 45 in the UK. [1]

Founded in 2006, CALM runs hard-hitting campaigns to promote culture change and better understanding of suicide so that all men feel able to seek help. The charity also provides frontline services through a free helpline, webchat and website.

Jane Powell, CEO of CALM said: “We’re delighted that the Royal Foundation of the Duke and Duchess of Cambridge and Prince Harry has chosen CALM as part of Heads Together which will ensure that male suicide finally sits on the public agenda.

“CALM has helped treble awareness of male suicide in the past ten years, but men are still three times more likely than women to take their own life. [2]

“The Heads Together campaign will help us raise awareness still further; we want everyone to be aware of the issue and any man to be able to find help if he needs it."

Heads Together has been selected as Charity of the Year for the 2017 Virgin Money London Marathon. The announcement comes as 25 runners take part in today’s race on behalf of CALM, collectively raising more than £20,000.

Jane Powell, CEO of CALM said: “CALM joins the Duke and Duchess and Price Harry in thanking the Virgin Money London Marathon for making Heads Together their 2017 Charity of the Year. We can’t wait for next year’s CALM runners to pick up the baton."

The first of CALM’s 2017 runners to be announced is George Prior-Palmer, a keen athlete and CALM supporter based in London. George said: “I’m over the moon to be running the Virgin Money London Marathon for CALM as part of Heads Together next year. Men aren't the best at expressing how they feel and all too often it leads to tragedy. I want to do everything I can to shout about this issue and get men talking.

“I ran the London Marathon for CALM in 2014 and I’m hoping to beat my time, which shouldn’t be too hard as I was dressed as a beer bottle!”

Full details of the Heads Together campaign will be released on 16 May and runners can apply to run for CALM in the 2017 Virgin Money London Marathon from 3 May.

The Campaign Against Living Miserably (CALM) is a national charity (reg. 1110621) dedicated to preventing male suicide, by providing frontline services for men, promoting cultural change and campaigning for better understanding of suicide and prevention.

To find out more please visit the CALM website: http://thecalmzone.net/

The Campaign Against Living Miserably (CALM) has been chosen by the Duke and Duchess of Cambridge and Prince Harry to join Heads Together... 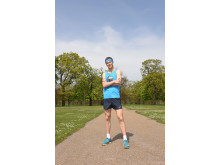 The Campaign Against Living Miserably (CALM) has been chosen by the Duke and Duchess of Cambridge and Prince Harry to join Heads Together...