CALM, the charity dedicated to preventing male suicide, announced today the latest figures in its campaign to raise awareness of the biggest single killer of men aged under-45. The findings from the online survey show that 41% of men and 38% of women in London identified suicide as the leading cause of death for men under 45 * - and a staggering 51% of regular Twitter users identified this[1].

Suicide is the biggest single killer of men aged under 45 in the UK (NISRA, GRO, ONS 2014) and so continuing to raise awareness is vital in helping prevent the 4,623 male deaths by suicide every year – an average of 12 per day[2].

The latest figures released today sees suicide awareness[3] in the capital at its highest amongst men (41%) than women (38%) and this increase is a significant result for a charity with less than a dozen staff at its London HQ*. In November 2014, the figures for awareness in London were 18% for men and 19% for women.[4]

CALM’s recent hard-hitting awareness campaigns include the help of high profile patrons such as Professor Green and corporate partnerships with Lynx (the Bigger Issues), Bauer Media (Rockstock) and a London based campaign with TOPMAN and Octopus Investments (‘Mind The Chap’), reaching in excess of 390 Million people across the UK to-date.

'CALM will be celebrating its 10-year anniversary this year with a fundraiser organised by Enjoy Yourself in East London on the 26th of March and has brought in Manifest London on a pro bono basis to further raise awareness around the issue of male suicide. To find out more visit CALM’s website: theCALMzone

[3]Suicide awareness: 1016 panelists were asked to indicate what they thought was the biggest killer of men under the age of 45 from a given list.

[4]The question in 2014 asked what the biggest killer is amongst men aged 20-45, whereas in the recent survey in 2016 it was men under the age of 45 (including those under 20). Questions were asked in slightly different ways.

“CALM works tirelessly with its supporters to run campaigns which are not only vital in raising awareness of suicide but also in breaking down the barriers to being able to talk openly about an issue that has too long been swept under the carpet. We believe these campaigns have been critical in generating the positive figures that can be seen in the YouGov figures published today.

“A rise from 18% in men (19% in women) to 41% in men (38% in women) within fifteen months is a significant increase in awareness. This means that more men and women are beginning to understand that feeling suicidal isn’t uncommon, but also shows us that more work needs to be done.”

CALM’s free, confidential accredited helpline and webchat service are available every day of the week from 5pm to midnight, staffed by professionals, on 0800 585858 (national) 0808 802 5858 (London) and theCALMzone

* All figures, unless otherwise stated, are from YouGov Plc. Total sample size was 1016 adults. Fieldwork was undertaken between 19tth-21st January 2016. The survey was carried out online. The figures have been weighted and are representative of all London adults (aged 16+).

** All figures, unless otherwise stated, are from YouGov Plc. Total sample size was 1011 adults. Fieldwork was undertaken between 11th-13th November 2014. The survey was carried out online. The figures have been weighted and are representative of all London adults (aged 16+).

To find out more about CALM visit: theCALMzone

The Campaign Against Living Miserably, CALM, is an award winning charity dedicated to preventing male suicide in the UK. Founded in 2006 the charity seeks to prevent suicide by providing a service for men who are down or in crisis, and by fomenting cultural change so that any man considering suicide feels able to seek help.

CALM receives around 5,000 webchats and calls each month to its helpline and webchat service. Calls and chats are free, confidential and anonymous. CALM’s helpline is accredited by the Helplines Partnership, and its webchat and helpline service is available every day of the week from 5pm to midnight, staffed by professionals, on 0800 585858 (national) 0808 802 5858(London) and theCALMzone

CALM supporters and advocates include David Baddiel and Professor Green, Dizzee Rascal and Frank Turner, and its offbeat brand and challenging advertising have proven effective in reaching men across the UK.

This Sunday (10th Jan 2016) Jamie Ramsay will land at Heathrow airport and run the final leg of his 16-month expedition in aid of CALM that saw him become the first Britain to run 17,000km from Vancouver, Canada, to Buenos Aires, Argentina. CALM & Jamie invite fellow runners to join him for his #ForrestGumpFinish as he runs from Heathrow Airport to College Green opposite the Houses of Parliament. 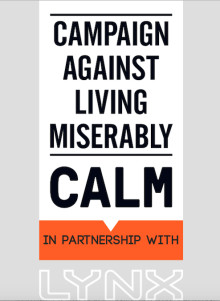 CALM's November #BiggerIssues campaign with male grooming brand, Lynx, successful, raising awareness that suicide is the biggest single killer of men aged under 45 by a massive 45%. A YouGov poll in October 2015 showed that awareness stood at 20% of UK adults. The poll was repeated on 15-16th December revealing that awareness across the country rose to 29%.