“We’re aiming to generate more data-driven insight into male mental health and anxiety than has ever been achieved before.” - Ian Moore, editorial director TheLADbible Group

TheLADbible Group is launching “UOKM8?” a three-month campaign to raise awareness of male mental health issues. We’re aiming to develop the broadest understanding of mental health and suicide risk in the UK. Currently, suicide is the biggest killer of British men under 45.

TheLADbible will partner with a range of charities including Samaritans, the Campaign Against Living Miserably (CALM), the Movember Foundation and the Mental Health Foundation over the next three months to engage our huge youth audience and get men to open up to each other.

TheLADbible will also be also be gathering quantitative and behavioural data from our audience to develop the broadest picture on the scale of these issues ever achieved. We will share that data with policy makers and charities and build an open source information bank for all the relevant stakeholders.

TheLADbible campaign will launch with Everyday Heroes, a series of documentaries from young British filmmaker Mollie Mills, whose previous projects include Boys Don’t Cry. In the launch film, Olympic gymnast Louis Smith talks about his own experiences of depression. https://www.facebook.com/LADbible/videos/2907633279283843/

“I was snatched away from my old life so quick, I got that down I could see why people would end up committing suicide…I think men try to be proud. Almost to the point that they try to be in denial. And if anything goes wrong, it just boils over,” says Smith.

Other video content created for the campaign includes a film about Andy’s Man Club, the Halifax-based mens’ group set up by campaigner Luke Ambler. The film series will be supported by an ongoing series of editorial pieces to drive conversation about these issues and a dedicated ‘”UOKM8?” hub integrated into theladbible.com site.

“We know that our audience are hugely affected by these issues and that they need to feel that opening up is the brave thing to do. Around half of all British men between 18-24 follow TheLADbible and I believe that by opening up our platform so our audience can talk about these issues, we can persuade young men to give themselves permission to talk about the feelings of isolation, anxiety and depression that they currently keep secret. We’re aiming to generate more data-driven insight into male mental health than has ever been achieved before.”

“More than three times more men take their own lives than women in the UK, and we don’t know why. CALM is proud to be working with The LADbible and supporting “UOKM8?” to explore masculinity and dig down into why the single biggest cause of death for men aged under 45 is suicide. The LADbible are brilliantly placed to help us listen to and learn from a huge number of guys and help build a better understanding of this silent killer.”

"Every 90 minutes someone in the UK takes their own life and many more men die by suicide than women. We all have a responsibility to understand more about the risks and what we can do to prevent people dying by suicide. Any insights and data that we can gather and understand through working together with The LADbible's audience could prove life saving."

“This ambitious campaign from TheLADbible has the potential to give us insights into one of the defining issues of our time on a scale not seen before. We know there’s a crisis in men’s mental health, the suicide statistics alone tell us this. What we need and what we hope this campaign can achieve, is to shatter the silence around this topic. Creating a culture that tackles the stigma and enables men to feel able to open up about their mental health and get support early when they need it. Before things reach crisis point.”

“The Movember Foundation is delighted to be part of TheLADbible campaign ‘UOKM8?’ Too many men are dying too young and it’s an issue that’s been ignored for too long. It’s vital to engage with men where they are, to understand what works best, to help make change happen sooner, before it’s too late."

The Campaign Against Living Miserably (CALM) is an award-winning charity dedicated to preventing male suicide in the UK. In 2014, male suicide accounted for 76% of all suicides and is the single biggest cause of death in men under 45 in the UK (ONS). 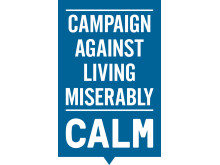 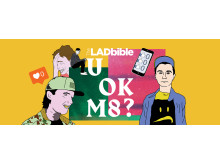 CALM are supporting the l...